An interview with an emotional vampire.

As promised I will give you the interview that I made with my new character quite a few years after the 1st book of the series ends. He is a bit of an unforgiving bastard. Also included is my terrible first sketch attempt to draw him. You will notice that his nose looks different which is on purpose and will be explained further in the book. The drawing of him is meant to resemble what he looks like when our heroes pick him up in 1920s  Boston. And yes I am well aware that I should not quit my dayjob in pursuit of drawing ;) 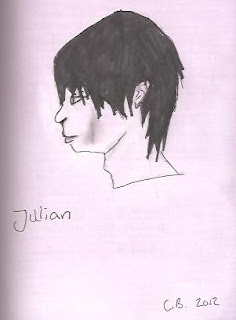 So Julian. You have come here today to tell us a little about yourself.

I suppose a little will have to do unless you have the time to dedicate quite a while to the cause but yes I have agreed to shed some light on myself.

First things first. Of the little information we have about the EV3 project it seems immensely complicated. You are very young to be leading a space-program of this magnitude. How does it make you feel to know that most of personal are twice your age and could never hope to have reached the position that you find yourself in right now.

I suppose that my human reaction would be to say that I am incredible proud of myself although I am probably older than what your mind can conceive from just looking at me. I am a product of a larger program initiated many centuries ago after all and although my bodily exterior might be that of a young man I can probably put your mind to ease a slight by telling you that I am the most competent man for the job.

I know from earlier interviews that you grew up with a human family. How has this affected your upbringing do you think?

I am very happy to be blessed with the foster parents that chose me. I feel extremely privileged to have experienced a normal upbringing that many of my kind are denied.

You are of course referencing the facilities where many of your race are fostered without ever knowing the outside world.

Yes. I am not here today to discuss the reasoning behind these facilities only to recognise that I am grateful for the chance given to me for a normal life.

Can you once and for all confirm that you were an inhabitant of planet earth before its destruction?

It is true that I grew up on planet earth as a part of a classified project yes, but I can assure you that I had long since been removed by the time the earth died out and was never in any immediate danger.  Before you ask the question that I know many of the people here on EV2 are dying to ask. Planet Earth was neither as wonderful as the legends want us to believe. Humankind was corrupted and living in filth. They treated those who could not fend for themselves little better than animals with beatings, poisoning and weird medical treatments which either made their own kind mad or killed them. I am happy that the human race has been given another chance although I wish that the choice had been offered to them when time came.

I thought we were not going to discuss politics.

Indeed. Excuse that interlude it is something that is very near to my heart as an adopted child of other surviving members of the original inhabitants of earth.

Tell me and the readers more about earth that was then.

Ah see I don’t understand this odd fascination of the past but very well I shall indulge you. The town I grew up in had very tall buildings and many humans living close together. I was placed at an institution as a small boy because of my looks which they dubbed eerie and because I refused to talk to them. They probably thought I was mad but then again how could they know that I was suffering from separation from my home planet? When I grew older and started remembering the place I had left behind I took up drawing. They brought me to live in the city and to be shown off as a freak. They thought I could communicate with the dead and that I was a medium, but when they found out that I never conveyed any messages but only drew all day they put me back in the institution only to be taken out at special occasions. It was at one of these outings that I was picked up by an expedition sent from the future to save me and bring me here.

Colonel Aldrich’s expedition as far as I recall reading?

Indeed. Although back then he was not yet colonel.

And you remain close to him?

I was brought up by his oldest daughter and son in law. They already had responsibility for the colonel’s daughter and son, so another child was hardly any big difference.

The colonel is very private about his family life and rarely ever speaks of his children. Are they not close?

I would prefer not to comment on that. This interview is about me and my work so far as I recall. All you need to know is that his children are all well. His youngest daughter is showing great potential and will if the universe is willing follow in her father’s footsteps someday.

I can understand that you yourself have tutored her?

I can’t deny that. We are very close and always have been. My biggest hope is that we can work together on future projects.

Can you explain this big project a bit further?

To put it in simple words that your readers might understand. We are in the process of either finding another suitable planet or creating one from scratch that will hold a substantial amount of people which, if calculations are correct, is exactly how many too much we will be on this planet with more expeditions incoming every day and human beings in general reproducing far faster than this planets resources will be able to sustain.

And when will this planet be ready for habitation?

Well first of all nothing is certain in these cases. But within a generation of human-beings we should be able to send the first colonists.

So not in our lifetime?
Well not in your lifetime at least. But then you get the satisfaction of marvelling at the brilliant future that is offered to your children and grandchildren.  And should you live long enough to experience this miracle of the universe it is very doubtful that you would be sent there in any case. I don’t mean to be callous but at that point the crucial task will be to put together a couple hundred fit human-beings with the knowledge needed to survive on a somewhat barren planet.

Cassandra
Open-hearted, open-minded, Master in English Literature and Communications with a big mouth. Environmentalist by heart, realist by default. Christian, nature-loving and married with cats. I love RPGs, fantasy, anything weird, new or just overall interesting.